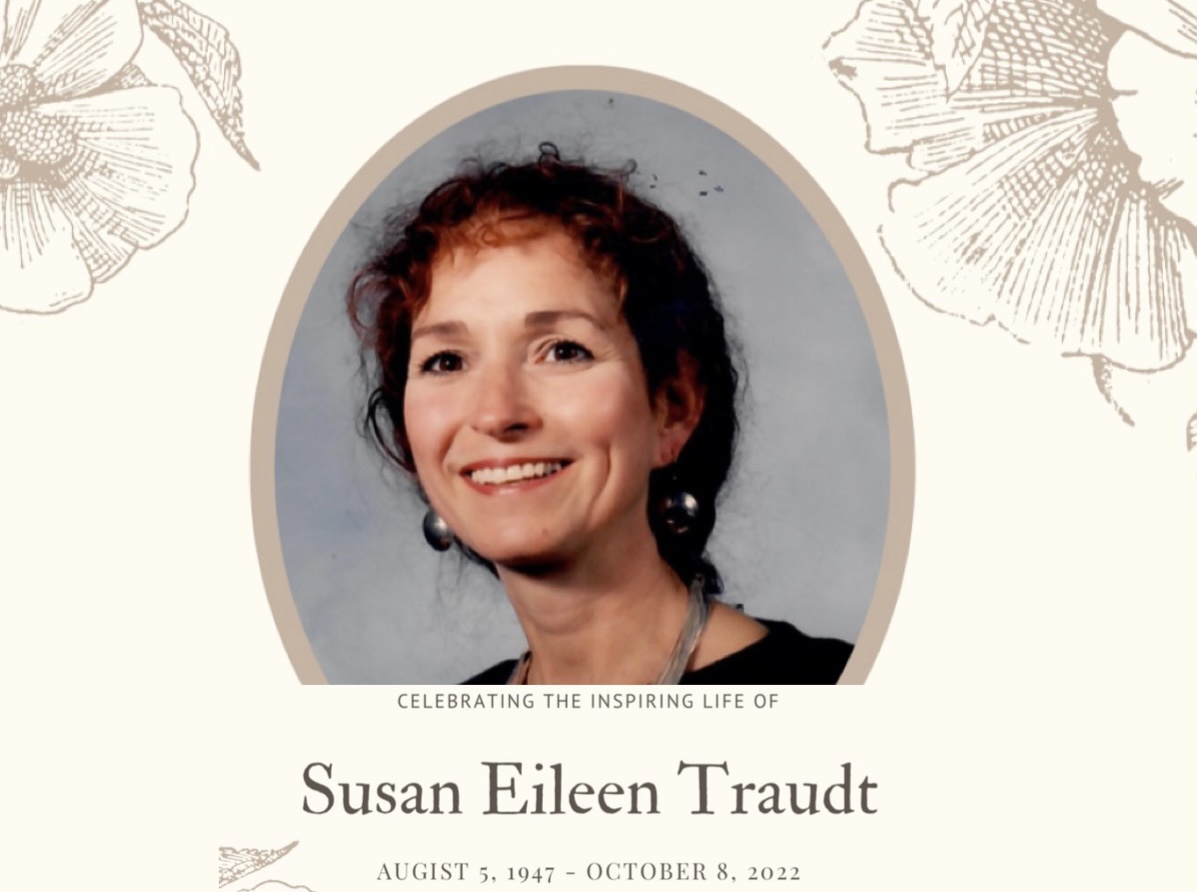 We honor and celebrate the Inspiring Life of SUSAN EILEEN TRAUDT. Susan will be cherished and remembered through the legacy of her family and friends.

Susan Eileen (Molen) Traudt was born to Howard Webster Molen and Wyvonna Lucille (Oler) Molen on August 5th, 1947 in Dayton, Ohio. Her parents were Dairy Farmers in the Springfield, Ohio area where she grew up with two sisters Sharon and Linda. She enjoyed youth growing in the country. She was even a Future Farmer’s of America Pageant Queen in 1965 which was the year she graduated from Tecumseh High School in New Carlisle, Ohio.

Susan was a very adventurous and well traveled woman residing in many different states including Florida, lowa, New Mexico, Pennsylvania and Nevada. She earned a Bachelor’s of Arts Degree from the University of New Mexico and furthered her studies at Duquesne University in Pittsburgh were she received her Master’s Degree in Elementary Education. Susan taught grade school and began her teaching career in the Mount Lebanon school district in Pittsburgh. She finished her teaching career in Las Vegas, Nevada where she later retired but enjoyed substituting for a few years after. Susan was a very caring person who had a way of lighting up a room with her smile when she walked in. She kept that smile until the end. She had a wonderful way with kids. She loved her students and they loved her. She collected piles of Thank you cards and gifts from parents and students alike during her teaching career.

Susan enjoyed exercising and was an avid jogger in her early years. She later took up yoga which she did every morning.

Susan passed on Saturday October 8th peacefully at Avenir Memory Care @ Summerlin. She is survived by her sister Linda Fry, husband Steve Fry of South Vienna, Ohio. Her brother in law Ronald Bickert of Beavercreek, Ohio and her son Eric Bobo of Las Vegas, Nevada. She is preceded in death by her sister Sharon Bickert and daughter Heather Bobo. Family and Friends will be notified of services at a later date. In lieu of flowers the family requests that donations be made to the Alzheimer’s Foundation.

Additionally, please feel free to sign the guest book below and leave a loving message or positive memory of Susan with the family.