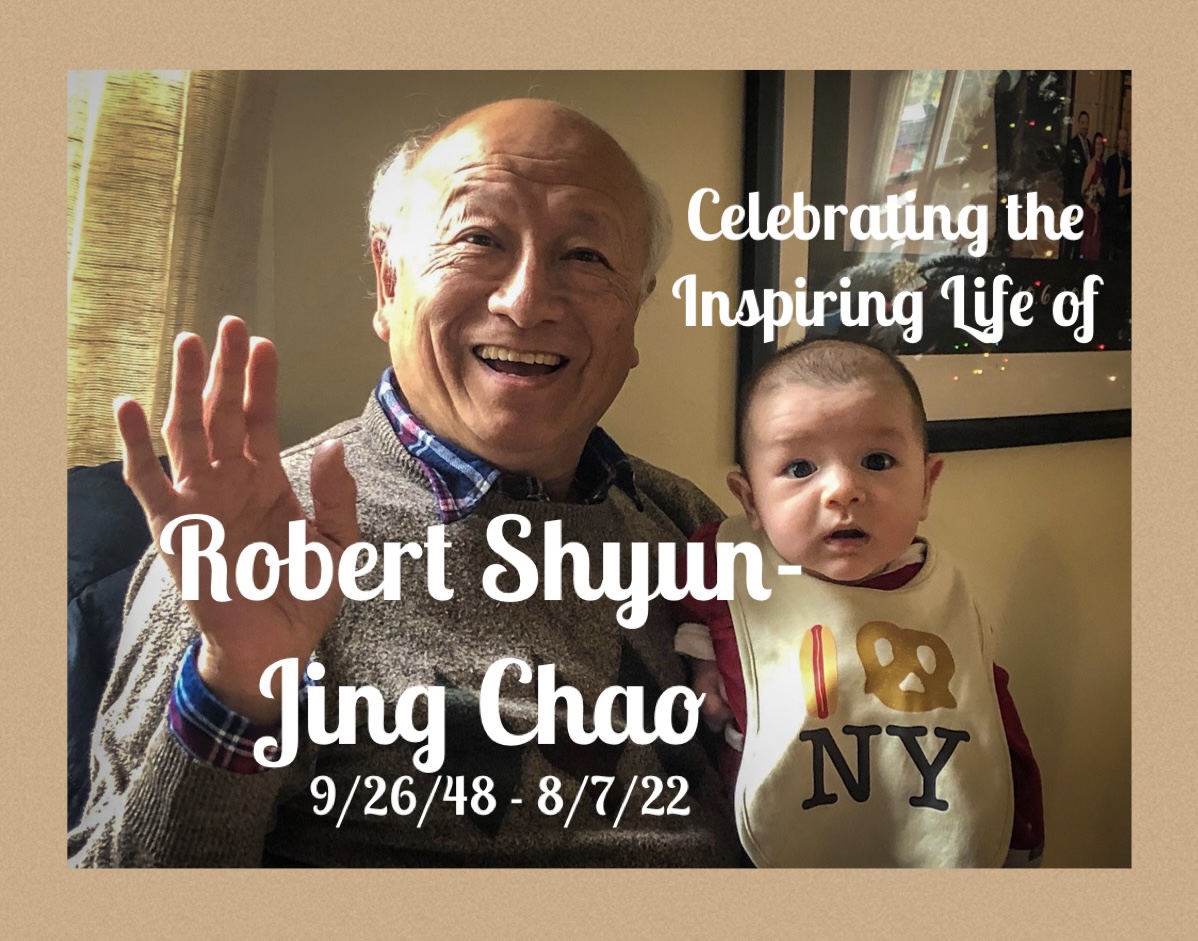 We honor and celebrate the Inspiring Life of ROBERT SHYUN – JING CHAO.

Robert Shyun-Jing Chao (趙循經 ) was born on September 26, 1948 to Fei-Kuan Chao (趙飛崑）and Shih-Ming Chang (張石明) in Nanjing（南京),  China.  During his early childhood, his father, a Kuomintang (國民黨) General who had fought against the Japanese invasion, retreated to Taiwan when the Communists took over of China. Though his grandparents would have liked to keep him, the oldest grandson, in China, his mother insisted that they flee together as a family.  She took Bob and his younger brother Wei (趙循緯) with her to escape at night on a fishing boat to Taiwan in 1949.  His youngest brother, Steve (趙循缇), and sister Virginia (趙循绮), were born there afterward.  He and the entire family grew up in 宋屋居易新村, Taiwan, a community with about 70-80 military families. He finished his elementary and middle schools there, then left home at age 15 to attend high school 師大附中 in Taipei in 1962.  Though quiet and shy from his humble background, he did well in school, and was elected class president in high school senior year.

After graduating from Zhong-Xing University (台灣中興大學), with a bachelor’s degree in Mechanical Engineering, Bob immigrated to the US in 1971 for a graduate program at the University of Massachusetts at Amherst. There, he met his future wife, Ann (張良惠).  Upon completing his master’s degree in the Department of Mechanical and Aerospace Engineering, he received a Research Scholarship in the Department of Materials Science & Engineering at Cornell University on a PhD track in 1973.  He and Ann got married on January 2, 1975, in Taiwan.  In 1976 they moved to Chicago for his first job with IITRI and his daughter, Yvonne (趙一帆) was born there in October 1978.  He then took a job at IBM and moved to Endicott, NY where his younger daughter, Tiffany (趙一倫), was born in July 1982.  They moved to Chappaqua, NY, in 1991, for an internal job assignment within IBM Headquarters, and settled there for the next 30+ years.

Bob spent most of his career at IBM, first as an engineer, then in Intellectual Property Mergers and Acquisitions.  After IBM, he spent years working abroad, first with Infineon in Munich, Germany, then in Singapore and Taiwan, and came back home in 2016, formed a partnership “Radius IP” with an IBM colleague and worked there until his final days.

Bob was a generous, loving, and patient father, who always knew how things worked, and weathered a long daily commute without complaint. He was an enthusiastic supporter of his daughters’ musical interests, attended dozens of orchestral performances, and wholeheartedly encouraged their academic careers and extracurricular interests.

He continued to stay in touch with many of his childhood friends, high school, and college classmates, as well as his Phi Lambda fraternity brothers, and his friends from OCA Westchester & Hudson Valley, CAAPS, and several other volunteer organizations he was involved with. He was particularly committed to OCA-WHV and had been the chapter’s Co-Chair of Advocacy. With the rise in anti-Asian hate crimes in recent years, he became a vocal advocate against anti-Asian hate and actively tried to build bridges between the Asian American community and other minority communities. He spoke at a #StopAsianHate Rally in Bedford, NY in April 2021 (https://www.youtube.com/watch?app=desktop&v=MvQ8TN1k_0Q) was also interviewed in newspapers (https://www.washingtonpost.com/nation/2021/03/13/asian-american-attack-white-plains/

Bob loved traveling and visited many places in Europe and Asia over the past several years. However, what he loved the most was spending time with his family. In New York, with Ann and Yvonne, he enjoyed seeing Broadway shows, visiting museums, eating good food, and walking in the woods to forage for ramps and mushrooms.  He and Ann also traveled often to California to visit Tiffany, David, and Theodore (Teddy), who brought immense joy to Bob’s life. In his free time, Bob loved playing ping pong, learning new languages (German, Japanese), getting to know people, and volunteering in his community at the local food bank and with various non-profit organizations. At the time of his passing, he was visiting Las Vegas for the national OCA conference, where he was to receive the Unsung Hero award for his tireless advocacy against anti-Asian hate.

Bob passed away peacefully on August 7, 2022, surrounded by his family, and would have been honored to know he became an organ donor shortly thereafter.

Bob is survived by his wife, Ann, daughters, Yvonne and Tiffany, son-in-law David Bebb, and grandson Theodore Bebb, as well as his sister, Virginia, and brother, Wei. He is predeceased by his younger brother, Steve. One of our fondest memories of him is his heartfelt and moving toast at Tiffany and David’s wedding, which you can view here: https://mediazilla.com/Uq2hztnZ7

The family will have a memorial service on Saturday, September 24th, in New York (location/time TBD). Please contact Bob’s daughters, Yvonne (yvonnechao@gmail.com) and/or Tiffany (tiffanychao@gmail.com), for information. If you have any loving stories with Bob, we would love to read it if you can share any of them with us here. You can also add and view photos in this online album: https://photos.app.goo.gl/em8zcHxt9Me3QVJJ7

Additionally, please feel free to leave a loving message or positive memory with the family.