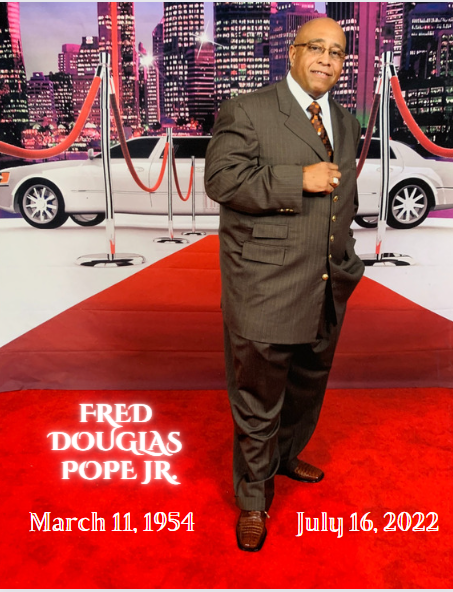 We honor and celebrate the Inspiring Life of FRED DOUGLAS POPE JR. Fred will be cherished and remembered thru the legacy of his family and friends.

FREDERICK DOUGLAS POPE, JR (Doug) was born on March 11, 1954, to Fred Douglas Pope Sr. and Murel Joy Johnson-Pope. He was the only son born to this union.

Raised in the city of Los Angeles, Doug attended Carver Jr. High and Susan Miller Dorsey High School. As a member of the graduating class of 1971, Doug was very personable and participated on the swim and track teams. He remained an avid supporter of Dorsey alumni picnics, reunions and dances. He was very proud to be a Don!

Doug was known to create his own style. He was elegant, well dressed and tailored in his fashions. When he stepped into the OG dance you knew he had arrived!

In 1986, he met and married Valerie Jordan and together they shared a marriage and relationship that spanned over 36 years. They enjoyed taking trips, concerts, volunteer work, worship, prayer and family gatherings.

Throughout the years, he had numerous adventures. He was “self-employed” and met numerous persons from all walks of life.  He would later come to realize that these adventures would lead to some dark days and dreary nights. He began a life of sobriety that lasted over 14 years. During this time, he developed a ministry of texting inspirational messages to over 100 people throughout the United States daily.

On January 28, 1990, Doug joined New Mt. Calvary Missionary Baptist Church under the leadership of Dr. Lonnie Dawson. He became a member of the Men’s Chorus, Triumphant ministries, and the feeding ministry. Doug called Valerie one time and said “We fed over 100 people today!” He was so very happy to serve and loved each ministry he participated in.

When his inspirational message was not received on July 15, 2022, people were concerned. On July 16, 2022, God determined that Doug’s work on earth was complete.  To say he will be missed terribly is an understatement. Doug was a peacemaker with a forgiving spirit, a gentle man with the love of God in his heart. Doug was a man who would let you know you were loved, supported and to be encouraged.

Additionally, please feel free to leave a loving comment or positive memory of Doug with the family